Oh Lordy, by happenstance I stumbled over a butt-load of things I wrote from 2007-2009 when I first started to struggle with my Christian belief system. These were all saved to my Google Drive and I’m so glad I did. Thank you, former self!

One of these documents contained results from an extensive Spiritual Gifts quiz I took. Unfortunately, I did not save the URL address to look up to see if it still exists.

What, per se, is a “Spiritual Gift”? I’ll let the site explain:

Spiritual gift quizzes are like the Christian version of secular MBTI-like personality quizzes. They can reveal some great information about your personality, but are not scientific. At least the MBTI is loosely related on what we know about psychology.

Here were my results: 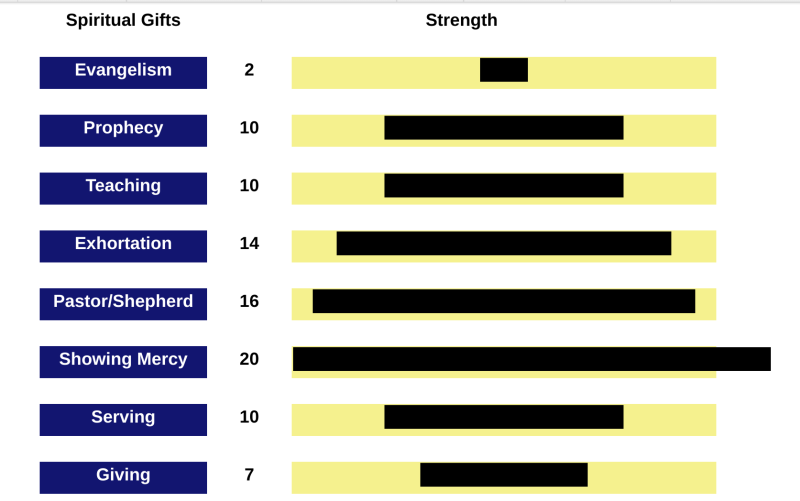 For “administration” I scored a 7 but I couldn’t fit it into this image. And, oh look! My “mercy” gift was so strong it broke the yellow barrier!

I think he might be wearing the wrong attire for shepherding. Where are his robe and sandals?

No one who knows me would find it a surprise that I am empathetic and compassionate, however one of the things I found personally discouraging in my time in church was that I was told repeatedly that I was great at serving and giving and that evangelizing the “Good News” is what I should be focused on doing. Well…this “spiritual gift” quiz proves that wrong!

I’m no good at sales. Not at all. For me to try to evangelize would be doing a disservice to the Church. Oh! That gives me an idea. Perhaps I should try to evangelize so as to have the opposite of the intended effect. Maybe I can write some satirical posts “selling” the good news. I love post ideas!

And as far as giving and serving goes, blow me. How many times was I expected to take care of the littles at church or raise funds. It would have been better for them to say “Hey, we need you to do this because we can’t find anyone else to do it” rather than manipulate me into it by telling me I’m “gifted” in these areas.

Because, honestly my biggest strength was in providing “counseling” like support to individuals. This is where the pastor/shepherd gift comes into play. I cannot tell you how often I was typically the person my friends would go to for psychological or spiritual advice, despite the fact my own life was screwed up. I took the Bible very seriously and studied it well and would think upon my friend’s issues and come up with scriptures for them to meditate on, as well as provide insight they may not have considered about a situation. I cringe now about this because while I was “gifted” in this I was unwittingly in some cases giving advice that would perhaps actually be doing them harm.

Exhortation. Because I believed it was one of my stronger spiritual gifts I believed that I should be able to go to church leadership and “lovingly” tell them what issues I saw in the church that needed to be resolved. As a person who enjoys studying social psychology I often find myself both amused and disheartened by people’s lack of insight into others’ behavior but more so the manipulation of such behavior.

The response was not good. I never, not once, was listened to and in fact basically got kicked out of one church for advocating for people who had been disenfranchised by the church. I was seriously trying to “lovingly” make them aware that they (the church leaderships) were being dickish. And, believe me, there was a lot of “dick” to go around.

I was reading a saved email exchange my husband and I had with a covert narcissistic pastor of a large-ish church that is still in existence, sadly. I was going to post it, but even anonymously it doesn’t sit well with me post something that was said in confidence so I just won’t. Interestly, the pastor’s obsession with spiritually “building” reminds me of Trump’s obsession with The Wall.

At the time my husband and I were responding to the pastor’s series of sermons in which he (the pastor) guilt-trips his congregation into the laborious work of building “His” (really it was the pastor’s) vision. The pastor compares it to doing the hard work of digging a ditch to build a foundation and seems to be implying that his brethren, by not working harder, are not willing to fulfill God’s vision. My husband and I, even as charismatic evangelical Christians, thought that was utter horseshit and so we called him out on it.

Okay, fine. I will share one thing the pastor wrote:

“Moses never expressed personal doubt of God or the mission he had sent on to his people to those people. That would have been terrible leadership…my warning was from doubting what people are doing is from God, and that the Bible hasn’t changed what it is saying, that there is no reason to think that God isn’t with us.”

After re-reading the exchange without my “God” goggles on, I realize that the church was a business in which the pastor was expecting the congregants to do the labor for free. That’s rich, considering that they were also paying his salary. Nice. His congregants were all 20 and 30 somethings who were working multiple jobs, many of whom had small children, who were struggling to pay their rent but on top of that were spending 5-10 hours a week engaged in serving the church (ie. the pastor’s “vision”). How can one not speak up about how wrong that is?

#SorryNotSorry Just using the “gifts” that God gave me.

5 thoughts on “My Spiritual Gifts”

Hi! I go by "Quixie." Quixie is a shortened version of "quixotic," which means: "exceedingly idealistic; unrealistic and impractical." It's how I described my evangelical Christian faith when I started blogging 5 years ago. Now I'm an agnostic atheist who is trying to find a balance between idealism and reality. I write primarily about my mental health journey (I have bipolar disorder), and I also discuss my deconversion, mindfulness, exercise, music, reading, and other cultural topics.